December 12,2016: The Governor in Council has extended the time limit for the issuance of the Decision Statement for the proposed DGR project by 243 days. 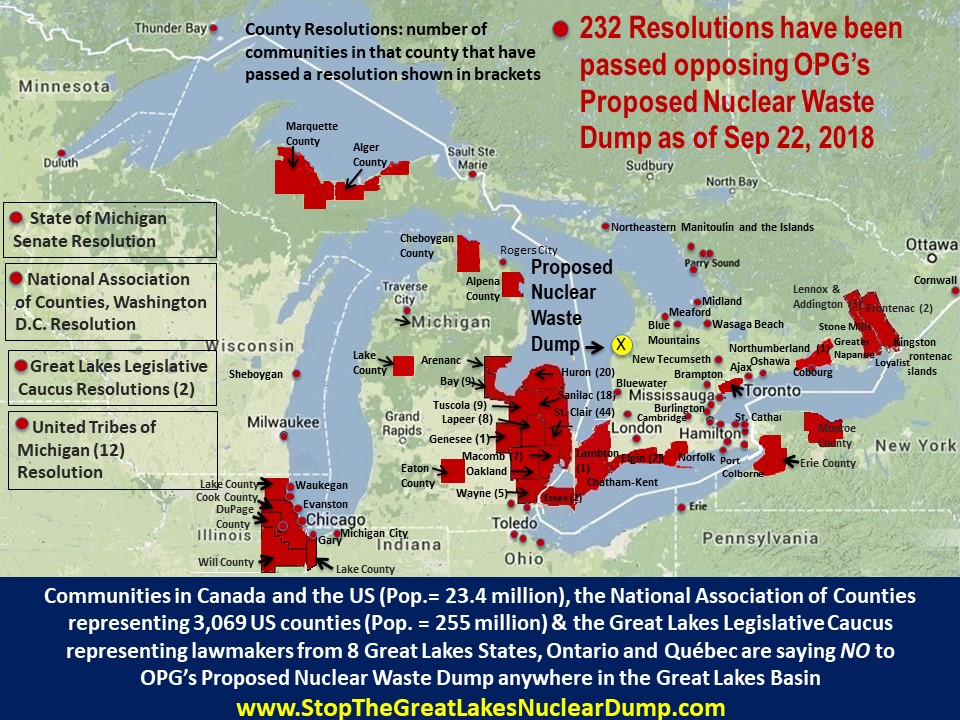 Ontario Power Generation plans to bury and abandon radioactive nuclear waste approximately 400 meters below Lake Huron even though the 3 existing Deep Geological Repositories (DGR) in the world have all have had uncontrolled radioactive leaks. In knowing that DGR’s have a 100% failure rate the proposed nuclear waste dump on Lake Huron is borderline insane.

The Great Lakes provide fresh drinking water for 40 million people in two countries and has an abundant fishing industry that generates $7 billion a year employing hundreds of thousands of people. The Great Lakes comprise 21% of the worlds fresh water supply and created by an ice age about 12,000 years ago. In contrast, radioactive isotopes such as Plutonium that might find it’s way into the proposed nuclear waste dump has a half life of 24,000 years. This means that we are going to have to baby sit this highly toxic nuclear waste for 24,000 years? I’m not sure that’s even possible. The human race hasn’t even been around that long.

Ontario Power Generation, states this underground dump “is not likely to result in any significant residual adverse effects to human health or the environment, including Lake Huron and the Great Lakes.” That’s what they said about the Waste Isolation Pilot Plant (WIPP) until it had a nuclear accident releasing Plutonium for 20 days and exposed 28 workers to radiation.

Nuclear Waste Dump On Fire: Notice How They Blame The Fire On The Vehicle and Don’t Show The Exploded Yellow Barrels of Nuclear Waste

It’s bad enough that we have radioactive leaks like this “Indian Point 2 Nuclear Spent Fuel Pools Cracked – Uncontrolled Leaks of Radioactive Liquid Have Reached The Hudson River” that have caused over 20 thousand cases of cancer for people living with 8 miles of the leaking nuclear plant. Spent fuel and radioactive waste lasts for 100,000 and things can go wrong like in this Video: Nuclear Fire and Explosions at Radioactive Waste Dump 90 Miles From Las Vegas – Why Didn’t They Evacuate The Town? And to add insult to injury the mainstream media reports: Cat litter was responsible for $500 million radiation leak at WIPP (Waste Isolation Pilot Plant), nuke waste site shutdown – US Energy Dept . When I read that I almost fell out my chair. Cat litter? Really? Or could it be that the “intermediate level” nuclear waste over time changes and creates toxic radioactive byproducts?

Learn more and stay up to date:

Great Lakes Water To Be Sold To China As Half Of U.S. Faces Extreme Water Crisis