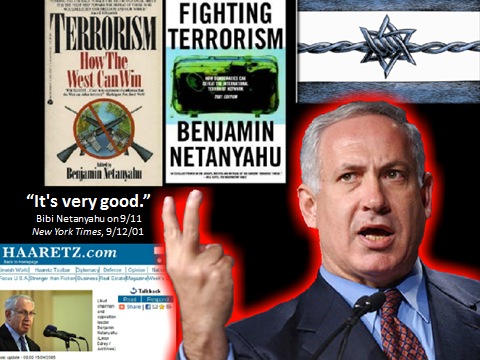 Kudos to Christopher Bollyn for refusing to let 9-11 slip down the memory hole
and mass murderers go unpunished.
In this article, Bollyn traces the origins of the “War on Terror” to the 1979 “Jerusalem Conference” where Neo Cons plotted to use “international terrorism”  to enlist the West to advance Zionist world domination.
Proof of the success of this strategy is virtually the whole political elite in the
West is complicit in this pernicious deception.
“The only way to liberate ourselves and our nations from this madness is to expose the true source of terrorism.”  –Chris Bollyn

by Christopher Bollyn
The Zionist War on Terror Creates More Terror
(Abridged by henrymakow.com)
From 1976 to 1978, Benjamin Netanyahu worked for the Boston Consulting Group, a firm connected to the Rothschild family.  In 1979, with his father, Benzion, Netanyahu co-founded an institute on terrorism.  They then organized an international conference in Jerusalem that emphasized the need for Western nations to fight terror groups (the groups opposed to Israeli occupation) – and the regimes supporting them.  The terrorism data that Netanyahu used to make his case at the conference was exaggerated and fraudulent.  George H.W. Bush spoke at the conference.
From my 2013 article “Obama’s Trip to Birthplace of War on Terror”
“In the summer of 1979, a group of powerful and influential people joined to launch an international propaganda offensive to promote and exploit the issue of ‘international terrorism’,” Philip Paull of San Francisco State University wrote in his 1982 thesis on theJerusalem Conference on International Terrorism. “The propaganda ‘blitz’ originated in Jerusalem. The conspiratorial network included present and former members of the Israeli and United States governments…
“This ‘anti-terrorist’ propaganda campaign was and is being conducted in a style reminiscent of wartime ‘psychological warfare’ by journalists serving as conduits and spreaders of misinformation originating in Jerusalem,” Paull wrote in his thesis…
As Paull demonstrates in his thesis, “the entire notion of ‘international terrorism’ as promoted by the Jerusalem Conference rests on a faulty, dishonest, and ultimately corrupt information base.” This is equally true of the official versions of the terror attacks of 1993 and 2001. They are nothing more than packs of lies designed to place the blame on Arabs and Muslims. 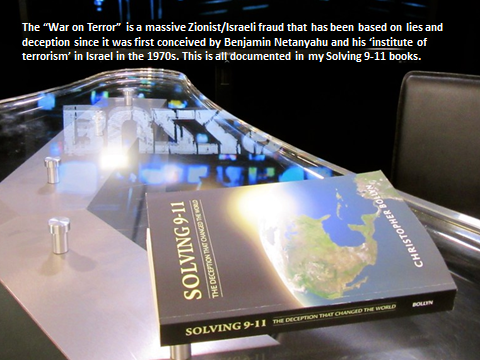 The American people have been the primary target of the vicious ‘psychological warfare’ waged by the Israeli government. The purpose of the Israeli psychological warfare is to create fear through false-flag terrorism like 9-11 in order to impose the Zionist fraud known as the “War on Terror”. I have done my utmost to provide an antidote to this fear and deception with my book, Solving 9-11: The Deception that Changed the World.
“The heightened global media coverage of ‘international terrorism'”, Paull wrote, “was for the most part a result of a deliberate, well-financed, international propaganda campaign initiated by the Israeli government.”
The theme of ‘international terrorism’ “was used to portray the ‘Free World’, including Israel, as essentially on the defensive before a virtual epidemic of terrorism which threatened the very fabric of civilization,” Paull wrote. “But in order to transfigure ‘international terrorism’ into a political bubonic plague, it was necessary to produce false and misleading ‘information’, or misinformation.” Paull’s thesis explains how the Netanyahu institute and the Israeli government used misinformation to “deliberately exploit the emotions of fear and anxiety.”
The “War on Terror” is a Zionist fraud based on lies, deception, and illusion.
“He [Pinhas Lavon] inspired and cultivated the negative adventuristic trend in the army and preached the doctrine that not the Arab countries but the Western Powers are the enemy, and the only way to deter them from their plots is through direct actions that will terrorize them.”
– Israeli prime minister Moshe Sharett in 1955 writing about Pinhas Lavon, defense minister during the “Lavon Affair,” an Israeli false-flag terrorist bombing campaign against U.S. and British agencies in Egypt, July 1954. 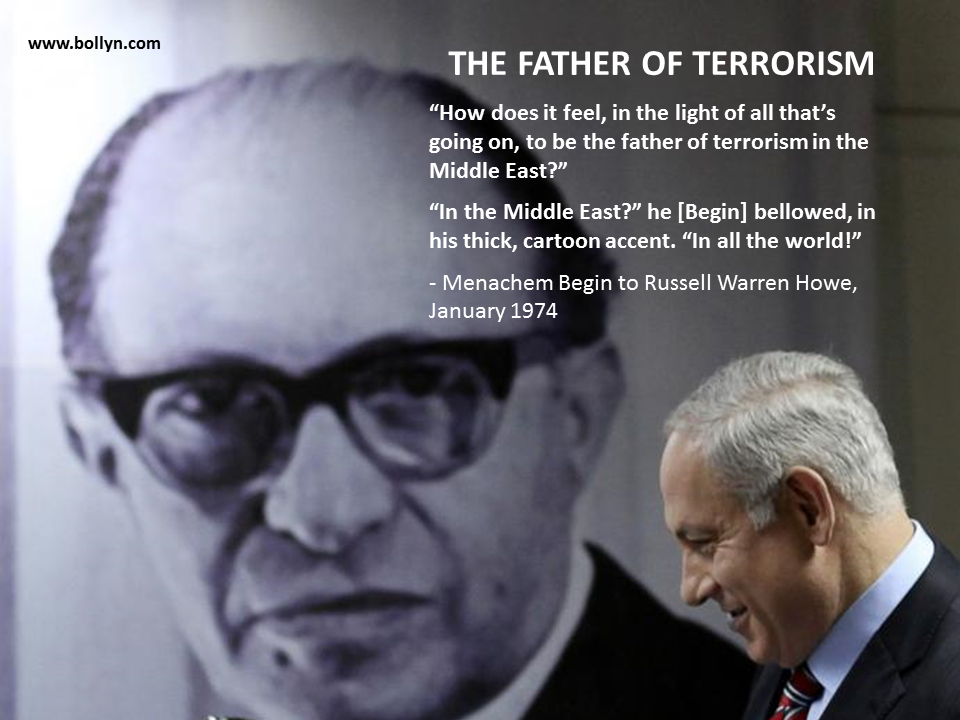 As long as Western governments and societies allow themselves to be deceived about the true nature of terrorism, the “War on Terror” and the threat it is meant to eradicate will only get worse.  For our political leaders and media to go along with false-flag deceptions and to flail away at phantoms is to ensure that the “War on Terror” will go on for a very long time.  The only way to liberate ourselves and our nations from this madness is to expose the true source of terrorism.
So, here we are, fourteen years after 9-11, having waged two wars of aggression in which millions of lives have been ruined, having endured the imposition of draconian “anti-terrorism” legislation, and having wasted trillions in the “War on Terror” – and still there is no end in sight.
ENDLESS WAR
In spite of all this effort and money spent, the threat of global terrorism seems to gaining strength every day, as we can see from the recent downing of the Russian plane in the Sinai and the attacks in Paris. Clearly, we must be doing something wrong. 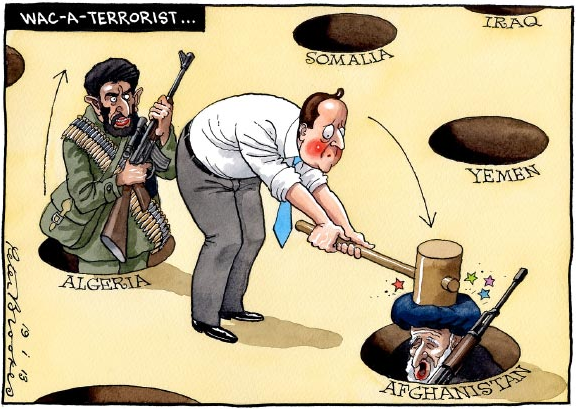 The “War on Terror” is like the “Wac-a-Terrorist” game in which Western nations pound Middle Eastern nations in response to acts of terrorism. The United States invaded Afghanistan and Iraq based on false claims that they were involved in the terrorism of 9-11.
It should be obvious to anyone who thinks about terrorism and the global “War on Terror” that we have utterly failed to understand and address the root causes of terrorism.  This is true whether we are talking about false-flag terrorism, such as 9-11, or real ‘terrorism’, such as what we see when Palestinians take up arms against the Israeli occupation.
In the latter case, our leaders and the so-called “international community” have completely failed to address the grievous injustices suffered by the Palestinians living under Israeli occupation since 1948.
The day after the recent attacks in Paris, Margot Wallstrom, the Swedish foreign minister, appeared on Swedish TV and explained how the Israeli occupation was at the root of Palestinian violence, saying, “… you come back to situations like that in the Middle East where not least the Palestinians see that there isn’t any future (for them). (The Palestinians) either have to accept a desperate situation or resort to violence.”
CONCLUSION
The criminal network behind the false-flag terror attacks of 9/11 is comprised of senior agents of Israeli intelligence and their Zionist cohort in the United States, which I have shown and documented in my book Solving 9/11 – The Deception that Changed the World.  Nearly all of the key people in this network are either dedicated Israeli intelligence agents or orthodox Jewish Zionists.  Former U.S. Assistant Attorney General Michael Chertoff and U.S. District Judge Alvin K. Hellerstein, key agents in the 9/11 cover-up, are both orthodox Jewish Zionists.  Chertoff and Hellerstein are certainly fully aware of their huge crimes against the American people, but their religious duties to the Jewish people – their “community” – mean much more to them.  [Makow- “Orthodox” Jews re. Cabalists, Illuminati, Freemasons]
Their religious ethics dictate that they serve only Jews.  Orthodox Jews like Chertoff and Hellerstein consider non-Jews as animals and slaves.  To cause the death of a non-Jew is not considered a sin or a punishable crime among orthodox Jews.  This is not merely hyperbole on my part.  To understand how orthodox Jews really view non-Jews, I strongly recommend reading Israel Shahak’s book, Jewish History, Jewish Religion – The Weight of Three Thousand Years.
I met Israel Shahak in the 1990s in Chicago and was very impressed with the man and his writing. The Roman historian Tacitus said the Jews “regard the rest of mankind with all the hatred of enemies” and Edward Gibbon (who called their religion “unsocial”) said they are “a race of fanatics whose dire and credulous superstition seemed to render them the implacable enemies not only of the Roman government, but of human kind.”
The hostility that orthodox Jews harbor for non-Jews is key to understanding the Jewish predicament:  the Jews see themselves as a people apart from others, a separate nation, and their first loyalty and obligation is to their tribe.  Orthodox Jews are raised with the idea that Jews are superior to other people.  This sense of Jewish supremacism and hostility toward other people is the reason the Jewish religion is seen as unsocial by Gibbon and others.  Like Hinduism, the Jewish religion is a set of rules of conduct for a specific ethnic group.  Christianity and Islam, on the other hand, are faith-based universal religions which embrace all of mankind.
———————
Related–
Rev Ted Pike     Kabbalah- Blueprint for Gentile Genocide
First Comment by Jim Perloff
Great article! About a year ago I had an epiphany about the mystery of why Glasnost suddenly swept the Soviet Union, and wrote an article for my website called “Did the Cold War End so that the War on Terror Could Begin?” Gorbachev took power in 1985, and Reagan struck the 1st blow of the War on Terror (bombing Libya based on a Mossad deception) in 1986. In 1991, the USSR broke up and the US fought its first Gulf War.
Now Bollyn adds pivotal new insights, and shows how deep the transitional plan went. The year 1979 was indeed significant. It was the year the Soviet Union invaded Afghanistan, helping setting the stage for its own downfall and US sponsorship of Osama Bin Laden. 1979 also marked the overthrow of the Shah of Iran (which, contrary to some conventional wisdom in alternative media. was plotted by Kissinger, implemented by Carter, and commenced the destabilization process we are now seeing played out with horror in the Middle East).
It would be interesting to know just how much all of this was originally plotted in Jerusalem. As an old anti-communist myself, I recall how the conservative media continually reminded us that the Islamic nations back then (late 70s, early 80s) were being sponsored by the USSR. This encouraged us anti-communists to start feeling aversion toward the Muslim countries while viewing Israel as “our sole ally in the Middle East.” Some ally!  We were being conditioned to become pawns in the Zionist game.
Source: https://www.henrymakow.com/2016/03/massive-zionist-fraud.html

7 Comments on “THE WAR ON TERRORISM IS A MASSIVE ZIONIST FRAUD.”