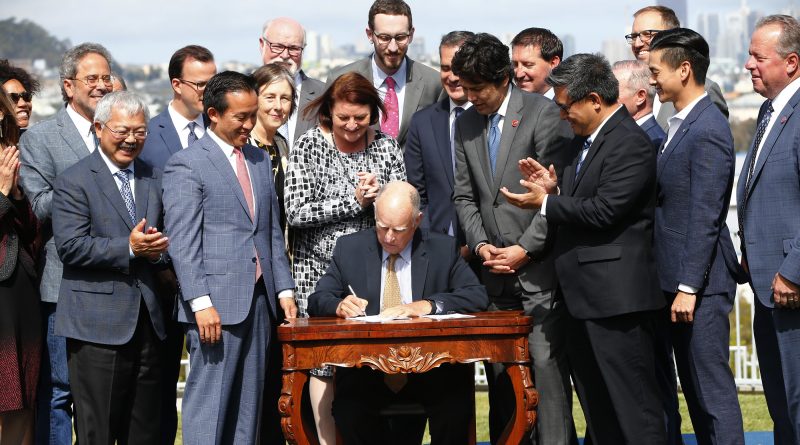 By The New Nationalist

Devastating wildfires weren’t the only disaster that struck California during the early weeks of October. Democratic Gov. Jerry Brown signed into law a series of bills authored by Sen. Scott Wiener, D-San Francisco, that may turn the state into one of the fastest-growing and most-dangerous cultural cesspools in the nation — though some would argue it has already achieved this dubious honorific.

Wiener, an East Coast Jewish homosexual, told SF Gate, “There are times when you introduce legislation that you ruffle some feathers. If you don’t, you aren’t doing your job.” This Wiener has been working overtime to debase the state since his election in 2015. To give you a flavor of what Wiener is about, here was the campaign ad that apparently stole the votes of San Franciscans from his Democratic rival, Chinatown machine politician with ties to a convicted pedophile, Jane Kim.

The following five bills would likely be viewed as controversial among more traditional (non-liberal) Democrats — had they known about them. Fortunately for Brown, there was a mass shooting in Las Vegas on Oct. 1 and one of the worst firestorms in the state’s history on Oct. 8 to distract the mainstream media. Rather than be highlighted, local news about the unwinding of laws designed to protect children, families and communities from degenerate predators was downgraded to mere briefs. Only those who benefit from and lobby for such bills chimed in via mainstream press, leaving the impression that there’s nothing to see here, move along. Au contraire. Let’s review.

SB-219 seems innocuous at first glance. In short, it makes it unlawful for nursing homes to discriminate against people based on their sexual preference, gender identity or HIV status. Read further into the bill, however, and it becomes draconian. It also makes it “unlawful” if staff are “willfully and repeatedly failing to use a resident’s preferred name or pronouns after being clearly informed of the preferred name or pronouns.” That means that not using a resident’s preferred pronoun could lead to civil penalties of up to $1,000, loss of one’s professional license and up to a year in jail, according to CBN News.

SB-54 (dba “California Values Act”), simply put, bars local law enforcement from assisting federal immigration agents in the identification and capture of illegal immigrants. Police are no longer allowed to stop and question illegal immigrants about their status or share information with immigration officials. Trump vowed to de-fund California if it became a sanctuary state, but he also announced funds would be provided to help Californians affected by the wildfires. We will have to wait and see whether his threat materializes when it comes to non-emergency appropriations. U.S. Attorney General Jeff Sessions sought to cut off sanctuary cities from federal grants, but judges blocked the effort.

SB-239 decriminalizes the act of knowingly and deceptively exposing another person to the HIV virus via unprotected sex or the donation of blood, tissue or breast milk. What was once a felony punishable by two to eight years in jail is now a misdemeanor on par with other infectious communicable diseases. It also repeals California laws that required people convicted of prostitution for the first time be tested for AIDS and increased penalties for sex workers who previously tested positive for AIDS. This bill to “modernize discriminatory HIV criminalization laws” is evil beyond the pale — but oh what a boon for the prostitution and porn industries!

SB-384 will eventually purge California’s existing sex offender registry of 90 percent of identified sexual convicts. Pervert Justice Warriors (PJW), like this gal at Bloomberg, applauded this bill, citing a few rare instances in which the listed convict was threatened. PJWs argue we must embrace and integrate these demons into our community in order to normalize them. Damned be the children, apparently.

Press reporting on this bill is full of lies and misinformation, but there were two important things they all got wrong.

First, not all registered California sex offenders can be viewed online by the public. California has two registries: a limited one that the public can see via the Internet and a comprehensive one that only law enforcement sees. The one the public can see has been around for about 20 years and is run by Megan’s Law. It primarily consists of those convicted of crimes against children. The data provided includes basic identifying information, their crime and their residential area. It’s meant to allow families to make sound decisions about where to live — or even who to date, if you’re a cautious singleton. Many states have such databases in place, and most don’t limit listings to crimes related to children.

In California, even those who end up on the public/Megan’s Law database can apply to be excluded from Internet disclosure. Until today, it seemed to be a moot point because the public database produced nothing but spinners for well over a week. [Convicted sex offender and San Francisco Democratic machine politician Enrique Pearce still isn’t listed in the Internet registry. Maybe he never will be.]

Second, articles claim this new misnamed “Sex Offender Registration Act” (as big of a lie as the name “Affordable Care Act”) allows people to have their name removed from the law enforcement registry rather than be listed for life for some petty offense. As LGBTQ group Equality California put it, “The changes will help gay and lesbian people who were targeted by police for crimes like consensual sex among adults in a park.” Offenders can petition the court to be removed, and such petitions are granted.

So the difference between the old law and new law is that registration will be tiered based on crime level. Each of the three tiers represents an arbitrary bureaucratic window of time of two to 20 years rather than based on a more personalized review. The old system approached it from the standpoint of safety for the community. The new system approaches it from the standpoint of fairness to a convicted sex felon.

SB-179 allows a person to change the gender on their birth certificate to female, male or non-binary without going through process of having a doctor certify to a court that a person has undergone a physical transformation — as long as it’s not for nefarious purposes. (Right, like somebody would admit to nefarious intent.) It also instructs the motor vehicle department (DMV) to allow people to just put whatever gender they want on their state I.D. card or driver’s license. There is no fiscal appropriation for this bill; however, the DMV estimates it will cost nearly $1 million in system updates.

So there you have it. What will tomorrow bring? More satanic drag queens  training more children, it seems. This retweet comes from the aforementioned flamus extremus PJW State Senator Wiener himself.