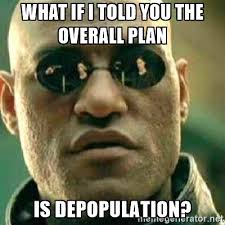 The world birth rate has halved in the last 50 years

This coincides with the rise of feminism as

Makow –  “I am one of many who missed the opportunity to have a normal family thanks to feminism. Depopulation strikes close to home for countless millions.”

We have been conditioned to scoff at the idea of conspiracy. The idea that people might plan to harm others without first warning their intended victims is too preposterous to consider!

We are like the passengers on a bus that keeps having “accidents” which cause untold death and suffering. These are wars, depressions and epidemics etc. We have just completed the bloodiest century in human history: Auschwitz, Dresden, Ruanda, Hiroshima, Cambodia. Over a hundred million people were murdered, and that’s not counting abortions. 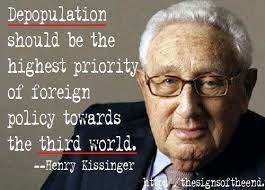 We keep changing the ‘driver’ but the accidents do not cease. This is because the drivers all take their orders from the same diabolical source.

Because the human race keeps running off the road, we are not reaching our destination. The road is God’s plan. For Christians, this is Jesus’ Gospel of Love. The destination: to know God.

Mankind evolved for this purpose. God wishes to be known by His Creation.

A reader “Pat” wrote last week that he has “a hard time believing that a group of elites could agree on anything, let alone a far reaching evil agenda…[It] seems like the process of achieving this agenda is too slow for any bad people…requires too much flawless, seamless, secretive, cooperation…The only entity with that kind of plan and patience with that kind of plan and patience would have to be the devil himself, wouldn’t it?”

I replied that he was on to something. At the beginning of the 20th Century, huge fortunes were built by monopoly capitalists like J.P. Morgan and J.D. Rockefeller. What is monopoly but the desire to “have it all,” and to drive everyone else out of existence. Evil is the spiritual cancer that seeks to “fulfill” itself not in God, but in limitless material acquisition and sensual excess.

It was not a large leap for a J.D. Rockefeller to go from owning the oil industry, the pharmaceutical industry, the banking industry etc. to wanting to own the whole world.  Rockefeller and his foundation have been in the forefront of the population “control” and eugenics movement. Ultimately the goal is to reduce the earth’s population for the simple warped reason that the less there is for you and me, the more there will be for J.D. and his cronies.

The elite just loves birth control. Warren Buffet, Bill Gates, Ted Turner are among the ultra rich that have donated billions to spreading the gospel of contraception, abortion, vaccines and feminism using the United Nations and “US Aid.” Rockefeller funded the invention of the pill, the IUD and owns the rights to the abortion drug RU-486. In the last 50 years, billions of public dollars have been spent on “family planning” designed to limit population by deceit and coercion, including compulsory abortion and infanticide.

In “The War Against Population” (1988), Dr. Jacqueline Kasun writes that in 1981, a directory of population control agencies in Washington DC listed 92 private (but mostly publicly funded) agencies, 12 United Nations and 57 agencies of the US government (p. 198). “The real problem of government family planning is not one of families out of control but of planners out of control,” she wrote ( p.211).

For the same reason, the Illuminati are behind “sexual liberation” and mainstreaming homosexuality. Through funding and media control, they make us regard sex as a recreation/physical release rather than as the expression of a spiritual bond (i.e. a loving marriage) resulting in children.

The modus operandi is to finance and promote disgruntled minorities in order to destabilize and undermine the world. Feminism is a prime example. It pretends to be about giving women equal opportunity in the workplace when in fact it is devoted to discouraging women from seeking fulfillment in motherhood. 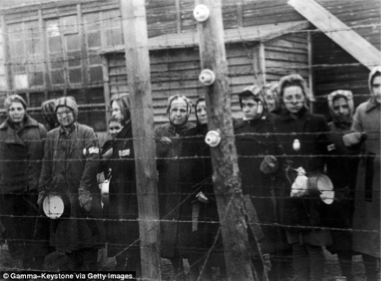 In the bible of modern feminism, “The Feminine Mystique” (1963) Betty Friedan makes this obscene comparison between housewives and Nazi concentration camp inmates:

“They were reduced to childlike preoccupation with food, elimination, the satisfaction of primitive bodily needs; they had no privacy, and no stimulation from the outside world. But above all, they were forced to spend their days in work which produced great fatigue…required no mental concentration, gave no hope of advancement or recognition, was sometimes senseless, and was controlled by the needs of others…” (306)

Clearly Friedan is talking about mothers. Comparing the nurturing of their children to the brutal slavery and poisoning of Auschwitz inmates is psychological warfare of the most vicious kind. Friedan, who hid the fact that she was a paid Communist activist, should have been denounced as a hate monger. Instead she was celebrated as the new oracle and received honorary degrees and fellowships at Harvard, Yale and Columbia. Saturday Reviewcalled her book “a scholarly work, appropriate for serious study” and anthropologist , fellow Jew, Ashley Montegu said it was “the wisest, sanest, soundest, most understanding and compassionate treatment of American woman’s greatest problem.”

Do we need further proof that the world is one-horse company town, and J.D. and his cabal own the company? They decide which politicians, universities and academics get funding, which books get published and reviewed, which movies get made. We are condemned to look into mirrors that don’t reflect reality. That’s why we are so skeptical of conspiracy. That’s why I am self published. On the other hand, Eve Eisler, is reading her pornographic play “The Vagina Monologues” on HBO. This “play, ” which features women looking at their genitals with hand mirrors and describing steamy scenes of lesbian sex with minors, masquerades as feminist empowerment. In fact, it is an invitation to lesbianism.

Feminism fits the elite’s depopulation agenda. Since 1963, when “The Feminine Mystique”was published we have experienced an unprecedented breakdown in the family. More than half of all children are now born out of wedlock; the number of single parent households has tripled. In “The Broken Hearth,” William Bennett writes: “Most of our social pathologies, crime, imprisonment rates, welfare, educational underachievement, alcohol and drug abuse, suicide, depression, STD’s, are manifestations, direct and indirect, of the crackup of the American family (p.4).”

We are now suffering from underpopulation. The US birthrate has been cut from 4 to 1.88 children per woman, the European and Canadian is 1.5. (We need 2.2 just for replacement.) Russia (1.6 children)  has remained steady. In the “Death of the West,” Pat Buchanan argues that population decline is responsible for the inevitable extinction of the West. 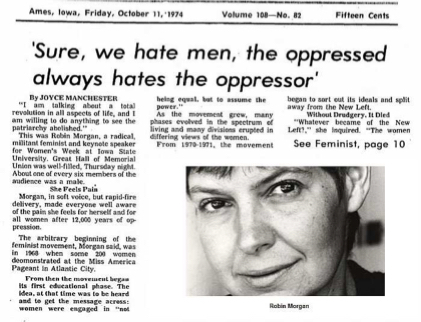 Reproduction requires the most delicate care. In the case of human beings, the female must be prepared for motherhood and honored for her contribution to society. The male must be shown that the standard of manhood is to provide leadership and sustenance for mother and children. Both mother and father must be able to give their children intellectual and spiritual guidance.

Instead, in schools and universities, the tender shoots of feminine sexuality are crushed under the feminist jackboot. Young women are taught that heterosexual sex, marriage and family are inherently oppressive. Homosexuality on the other hand is an act of rebellion that is “chic” and “normal.”

Friedan’s comparison of mothers with concentration camp inmates is perfect. Betty Friedan, agent of the Illuminati cabal, put mothers in the concentration camp. Mothers!?  The ultimate aim indeed is genocide. The Elite want the world’s population to be much smaller. Can there be any question that this is the devil’s work?

————– Betty Friedan- Mommie Was a Commie

The recent passing of Mary Tyler Moore, one of Hollyweird’s du jour darlings of cultural feminism; the main stream media including the so-called stalwarts of republican conservatism, Fox News has drawn out and gleefully displayed on the television screen how Ms. Moore in her self titled comedy sitcom, The Mary Tyler Moore Show represented the independent woman who conquered the board rooms of the stuffy, old crony, balding white male chauvinism. Tearing down the walls of male oppression. Than rolling out all the present day bleached head, cake face make up bimbos who are and were  so inspired by Ms. Moore boldness against said white male chauvinistic oppression. Incorrectly calling themselves journalists. Of course we know what passes as journalism is just pure intellectual laziness. 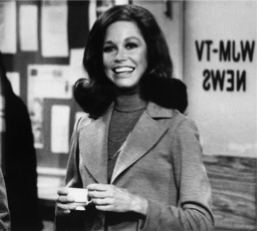 Any one who can speak two syllables can parrot all the news wires, i.e.,  Associated Press, United Press International, Reuters and so on and so on. Which what constitutes for journalism for these MSM talking heads. As Don Henley expressed in his songDirty Laundry; “I just have to look good, I don’t have to be clear.”

Not once I have seen any mention from these champions in the MSM of so called truth to Ms. Moore’s earlier role in the sitcom, Dick Van Dyke Show. Which shows her as a stay home mother and wife while her husband is the bread winner. That would be anathema to their satanic theme of turning society upside down.

We live in some dark days Henry. I pray that a turn around to normalcy would someday show its light; but I’m not holding my breath