Contributing Writer for Wake Up World

Just look at everything Amerika stands for as a whole. Corruption, greed, violence, military aggression, social degradation, scientific insanity and on and on. Its footprint on the world is nothing but horrific if you view it in the overall context.

Sure there are good people living there, and those who are unwittingly caught up in the mass hysteria, but they’re participating nonetheless. That accountability won’t go away. Unless they stand up to it and fully withdraw their consent and work to reverse the madness, they remain a part of the problem. That’s not an easy spot to be in when the very fabric of sociopolitical and economic support structures is an everyday fact of psychopathy. It breeds acquiescence, apathy and hence, continued participation — a self-perpetuating state of affairs.

Looking honestly at the collective insanity of Amerika is imperative if we’re to draw any kind of enlightening and empowering perspective.

Breaking Down the Nature of the Psychopathic Beast

Scientists researching the common characteristics of psychopathy now use a list of predominant qualities displayed by psychopaths that they’ve meticulously studied. The characteristics are quite telling and perhaps disturbing, as many can recognize these attributes in people and the society around them.

While scientists estimate only 2–4% of the population are psychopaths, Amerika ranking with a high percentile of those identified, they clearly understand that these non-empathic dehumanizing types gravitate towards positions of power. See how these attributes ingrained in such ideas as ‘manifest destiny’ and ‘American supremacy’ match up to the collective American way of life and its effect on the world of today, following the brief introduction:

The Hare Psychopathy Checklist-Revised (PCL-R) is a diagnostic tool used to rate a person’s psychopathic or antisocial tendencies. People who are psychopathic prey ruthlessly on others using charm, deceit, violence or other methods that allow them to get with they want. The symptoms of psychopathy include: lack of a conscience or sense of guilt, lack of empathy, egocentricity, pathological lying, repeated violations of social norms, disregard for the law, shallow emotions, and a history of victimizing others.

Originally designed to assess people accused or convicted of crimes, the PCL-R consists of a 20-item symptom rating scale that allows qualified examiners to compare a subject’s degree of psychopathy with that of a prototypical psychopath. It is accepted by many in the field as the best method for determining the presence and extent of psychopathy in a person.

The twenty traits assessed by the PCL-R score are: 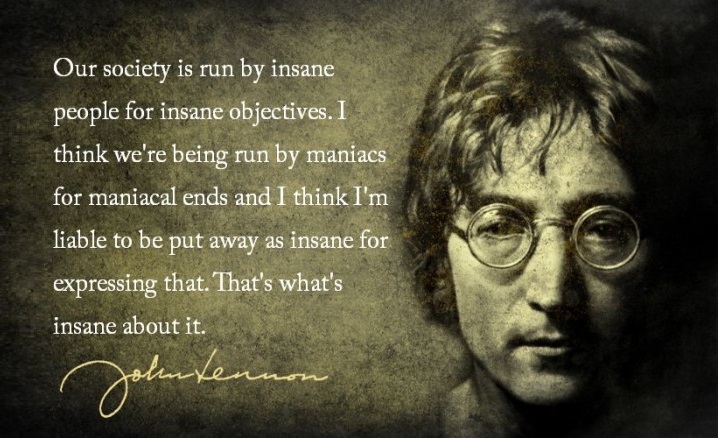 Does That Hit the Mark?

I’ll let your own imagination extrapolate each of those qualities rather than break it down as I see it. It’s overall quite stunning that a collective entity could be so blatantly psychopathic and to such a degree.

It’s something to be faced head on.

But really it’s nothing new. This is the definition of the behavior of empires and oligarchies throughout history. Humanity beats and flails its arms over and over when these qualities are recognized on so many humanity-exploiting, oppressive and destructive levels, but it’s generally been to no avail — according to both written records and the insanity we’re witnessing before us. We protest and rant to whatever degree but the show goes on.

So what to do?

Only a mass awakening can shake the foundations of this kind of destructive insanity. These power structures are built on the fearful allegiance to those who make it possible. When we withdraw our support and participation in these types of foisted machinations they cannot continue.

That may sound vague or simplistic to some but it’s extremely practical at the most basic level. If you’re employed in something supporting this paradigm, leave it.

If you’re giving attention and therefore energy to their charade, including the political, media and entertainment sideshow, stop it. If you’re still socializing on shallow levels of energy, or contributing to the fear and scarcity models by your sycophantic hand wringing and repeating of their fear programming, snap out of it.

Take a stand for truth and love while you still can. Don’t wait for affirmation and some comforting collective movement. Be your own being. Leave your participation in what is obviously wrong and lend your energy to what you know is right.

It couldn’t be simpler. If you’re waiting for the right conditions, you’re still firmly in their psychopathic pocket.

Get out now. The hour is late.

One Comment on “The Amerikan Way – A Study in Psychopathy”