Up to 20,000 neo-Nazi extremists gathered to honor the anniversary of the Ukrainian Insurgent Army (UPA). The UPA was a paramilitary group that collaborated with the Hitler and the Nazis.

Of course, since Ukraine now has a U.S. installed puppet government, the Western mass media – which now commonly operates as state-corporate propagandists for the American empire – remain silent like the proper lapdogs of the oligarchy they have become.

Revealing the nefarious nature of the U.S.’ chosen bedfellows, one of the reported leaders of the rally, Oleg Tyahnybok, who happens to be an associate of U.S. Senator John McCain and former Vice President Joe Biden, called on Ukrainian authorities to do more to crack down on the “criminal activities” of “organized Jewry.” Tyahnybok also is the leader of the ultra-nationalist political party Svoboda.

The neo-Nazi glorification is so deeply ingrained in the structure of pro-Western Ukrainian society that Ukrainian President Petro Poroshenko called the actions of the UPA soldiers an “inspiration” for future generations – while failing to mention that UPA slaughtered tens of thousands of Jews between 1943 and 1944.

As Bryan MacDonald, an Irish journalist reporting for RT, notes:

So, we had a major Nazi gathering in a European capital and the only English language sources that show up in a Google News search are from RT, Sputnik, The Nation and a half-hearted seven-sentence ‘report’ by US state broadcaster RFE/RL, which meekly describes them as mere “nationalists.” That means there is nothing from CNN, the Guardian, the New York Times, Washington Post or the BBC, among the usual suspects who make every little protest in Russia headline news.

In contrast to the complete lack of reporting on the massive neo-Nazi rally in Ukraine, in August extensive coverage was given to a “Unite the Right” rally in Charlottesville by the Western mainstream media.

In fact, back in August, Julian Assange, founder of the global transparency group WikiLeaks, took to Twitter to highlight and expose the extreme hypocrisy of the U.S. by contrasting the coverage of the extreme right protest in Charlottesville, which resulted in one death and multiple injuries, and the U.S. government funding of Ukrainian neo-Nazi groups during the Ukrainian coup that overthrew then-president Viktor Yanukovych.

In a startling picture that truly exposed the disconnect between US domestic and foreign policy, Assange juxtaposed a photo of a neo-Nazi torch march in Kiev with the far-right torch march held in Charlottesville. And while the imagery is very similar, the main difference between the two images is that the Ukrainian ultra-nationalists looked much more menacing – sporting bullet-proof vests and wearing black masks over their faces. 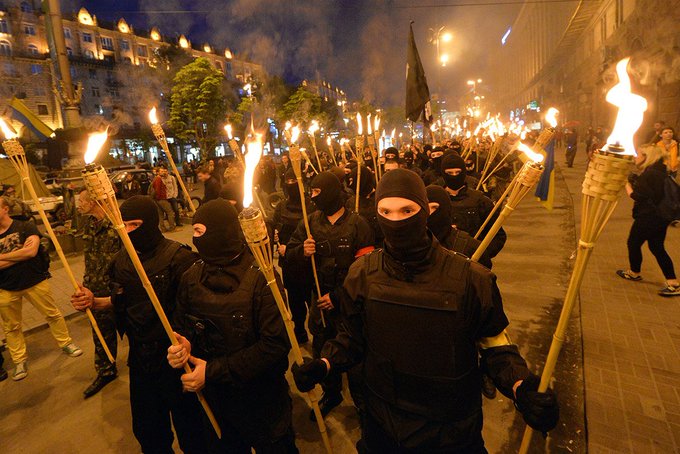 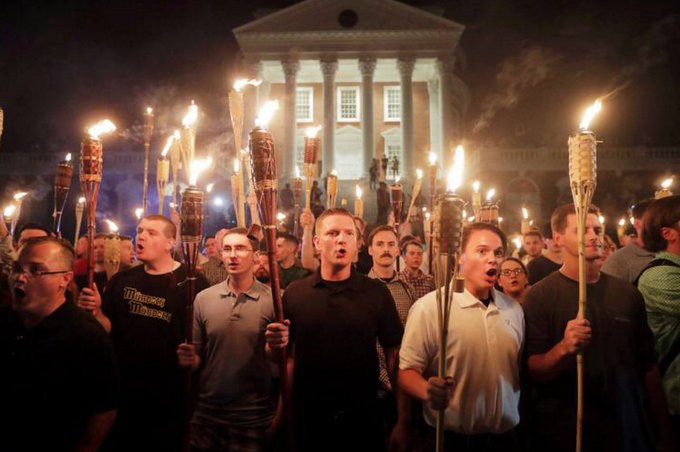 The new face of America is eerily familiar.

The extreme irony here is that while the violence blamed on white nationalists in Charlottesville was a non-stop talking point on US mass media, the Ukrainian neo-Nazis, who were largely funded by the United States government, received very little attention from the western media in spite of them overthrowing a legitimately elected government, installing a US-backed neo-Nazi regime and now holding 20,000 strong neo-Nazi marches.

The message from the power-elite in the control of Western mass media seems to be clear: Nazis organizing in America are bad, but Nazis that help the US overthrow foreign governments are good and deserve funding from the US government.

This type of disconnect seems commonplace in US political discourse though. Islamic militants are vilified in the US media as terrorists – that is unless they are renamed “moderate rebels” and are armed and funded by the CIA in hope of overthrowing a government (think Syria).

What makes this dynamic even more fascinating is that the vilified American far-right white nationalist movement is far from the centers of governmental power and do not have anything close to a political/military organization capable of putting together, let alone overthrowing a government — as was done in Ukraine — yet the media salivates over the story. In contrast, Svoboda and Right Sector, two neo-Nazi groups firmly entrenched in the mainstream of Ukrainian politics, have vast control of Ukrainian political discourse after US-backing of their fascist coup in 2014.

The use of identity politics is a dangerously divisive tool that when employed offensively typically leads to civil strife within a targeted society. The United States actively funds and arms sectarian groups across the world in order to foment civil disorder – often as a precursor to a full-blown regime change operation utilizing local proxy forces.

Where is the outcry from Western pundits against U.S. support for a Ukrainian government that officially lionizes and glorifies individuals and groups that slaughtered tens of thousands of Jews and espouse an extremely anti-Semitic and racist rhetoric?

Clearly revealing the extreme propagandistic nature of Western media, recent minor protests in Moscow, which saw less than a thousand in attendance, were given vast coverage in the U.S. and other Western countries, while 20,000 neo-Nazis with torches, fascist symbols and giving the Nazi salute are ignored.

Please share this story to help wake people up to the extreme propaganda and manipulation being employed by the mainstream media and their oligarchic master as a means of attempting to control people’s perceptions of reality!