By Thomas Müller of The New Nationalist

After the slew of so-called “terrorists attacks” over the last several years, it didn’t take long to see what the real agenda is. Israeli policing tactics are being rolled out. An interview with Breitbart Jerusalem proposed the Mossad model for “combating terrorism” and boogeymen. These measures include deploying armed guards to protect soft targets like restaurants, shopping centers and movie theaters.

Of course, the Israelis lead the pack on the skill sets required to “consult and advise” others on police state matters. They have lots of technology and equipment for sale to boot [see Fortune: “Why Israel Dominates Cyber-Security” and Unit 8200: “Using Mass Surveillance for Blackmail and Extortion“]. See Israeli Skunk Weaponry: Coming to a Neighborhood Near You.

This week we learn that the Trump administration plans to reinstate in full a program that provides local police departments with military surplus equipment such as large-caliber weapons and grenade launchers. This turns police into paramilitary forces.

When the U.S. Department of Justice published a report on Aug. 10 that documented “widespread constitutional violations, discriminatory enforcement, and culture of retaliation” within the Baltimore Police Department (BPD), there was rightly a general reaction of outrage.

But what hasn’t received as much attention is where Baltimore police received training on crowd control, use of force and surveillance. That would be Israel’s national police, military and intelligence services. 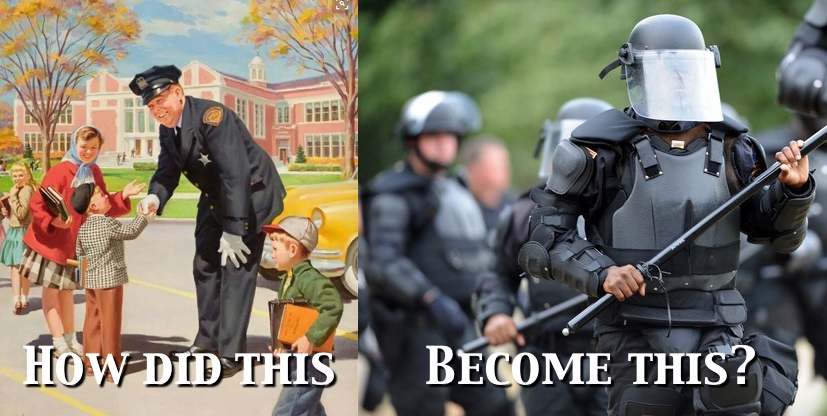 Baltimore law enforcement officials, along with hundreds of other departments throughout the US have all traveled to Israel for training. Thousands of others have received training from Israeli officials here in the U.S.

Many of these trips are taxpayer funded while others are privately funded. The Anti-Defamation League, the American Jewish Committee’s Project Interchange and the Jewish Institute for National Security Affairs have paid for police chiefs, assistant chiefs and captains to train in Israel and the Occupied Palestinian Territories (OPT).

Here is an example of what the Israeli security model looks like in real life, as an old Palestinian grandma is riddled with bullets at a checkpoint. Grandma’s crime here is DWO (driving while old). This video managed to slip out, and I don’t imagine the IDF is none too pleased. The source of this story comes through the courageous Jewish blogger Richard Silverstein.

You would be very well advised to not just slow down but avoid these neighborhoods or “accidents will happen.” In fact, you would be well advised not to go out much at all.

An element to be especially concerned about is increases in Zionist-sanctioned death squads (called Kidon or Bayonet) roaming the planet, including in sock-puppet-ruled countries within Europe as well as the U.S. Just about any critic or “difficult person” can now be labelled a “terrorist,” opening the way for extra-judicial hit lists and murder.

That was exactly the NKVD/Cheka model that was used in the Zionist-occupied government (ZOG) of the Soviet Union during the 1920s and ’30s. It has been repeated and refined in what’s left of Palestine during the last half century. The prospects of this couldn’t be more horrifying and nightmarish.

3 Comments on “Israeli Security Model Being Rolled Out in Europe, US”