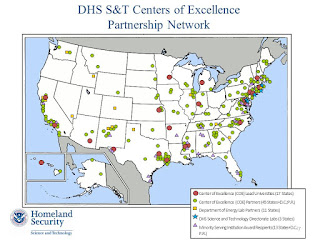 Ever wonder who’s responsible for our daily dosage of fear, terror and crime?

Look no further than our colleges and universities.

According to DHS, ‘Homeland Security Centers of Excellence’ (COE) are ‘led by a college or university’.

Colleges and universities have been working with DHS for fifteen years.

Since 2002, when the Homeland Security Act was passed, numerous colleges and universities have been feeding from the DHS money trough. Each year they line up like good little Bundists, promoting DHS’s vision of terror.

Think about that, everything you’ve been told about terrorism and extremism is coming from colleges!

Schools across America will do anything, even if that means working with DHS, so they can get a piece of the annual $35-$40 million pie.

A recent DHS article reveals, that George Mason University will receive close to $4 million to study, terror and crime. 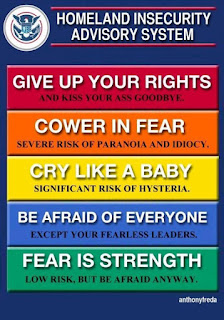 This August, DHS announced that George Mason University was going to lead a consortium of U.S. academic institutions and other partners for a new COE in Criminal Investigations and Network Analysis (CINA).

DHS proudly boasted they were giving CINA a $3.85 million grant for its first operating year in a 10-year grant period. Doesn’t that mean that DHS is planning on giving George Mason University $38.5 million over ten years?

Schools are working closely with U.S. Customs and law enforcement.

“As lead institution, George Mason University will spearhead a consortium of academic, industry, government, and laboratory partners throughout the country and will work closely with U.S. Immigrations and Customs Enforcement and other law enforcement organizations to establish a long-term productive relationship.”

DHS has also created a website called ‘Homeland Security University Programs’ (HSUP) that is dedicated to making it easier for colleges and universities to work with them.

“The Centers of Excellence network is an extended consortium of hundreds of universities conducting ground-breaking research to address homeland security challenges.”

How popular is HSUP with higher education?

Schools across America have made nearly 25,000 HSUP videos.

How many universities and colleges have produced critical reports or videos of DHS?

According to DHS more than 200 colleges and universities are designated National Centers of Academic Excellence (CAE). (Click here to see a FEMA list of schools working for them.)

“Over 200 top colleges and universities across 44 states, the District of Columbia, and the Commonwealth of Puerto Rico are designated  ‘National Centers of Academic Excellence.”

“The Center’s research will focus on criminal network analysis, dynamic patterns of criminal activity, forensics, and criminal investigative processes.  CINA will work with DHS components and other federal, state, and local law enforcement agencies to develop strategies and solutions for on-the-ground use by agents and officers to predict, thwart, and prosecute crimes.  CINA will also contribute to the education and development of both university students and professionals working in the realms of prevention, prediction, investigation and prosecution.”

How many schools work with DHS?

A HomelandSecurityEdu map shows that nearly every school in America, offers some type of Homeland Security degree or career. 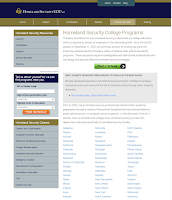 Look no further than DHS, who’s vision of a police state is becoming a reality.