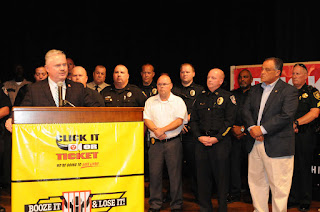 It used to be the DOJ, COPS, NHTSA and the USDOT were responsible for paying police to ticket motorists.

In the past few years, things have taken a turn for the worse. It now appears that DHS has become the largest cash provider for police departments.

What does that mean for motorists?

A recent article in the Knoxville News Sentinel, reveals that the Blount County Sheriff’s Office received $91,488 from DHS to create ‘specialized enforcement’ on The Dragon, a section of U.S. Highway 129 near the North Carolina state line.

Another article in the Tennessean revealed how DHS is giving prosecutors millions to target motorists.

“State Department of Safety and Homeland Security Commissioner David Purkey was joined by Vic Donoho, director of the Tennessee Highway Safety Office, in Dickson on Aug. 30 as one part of a four-city, statewide tour Wednesday to announce $19 million in federal grants for programs to reduce road fatalities.”

Two years ago, I exposed how DHS has been paying police to set up DUI checkpoints. Incidentally, all of these alphabet soup agencies give money to DA’s and law enforcement.

What are the odds you will be stopped by police?

Recently, I wrote an article warning people that police are stopping and questioning 20 million motorists every year.

“Police pull over more than 50,000 drivers on a typical day, more than 20 million motorists every year.”

If police stop so many motorists, why do they need more money?

In 2011, the NHTSA claimed that traffic deaths in the U.S. were at a SIXTY-ONE year low.

“An estimated 32,788 people were killed in traffic accidents in 2010, according to the National Highway Traffic Safety Administration. That represents a 25 percent decline since 2005, when there were 43,510 traffic fatalities, and the fewest deaths since 1949.”

In 2014 the trend continued until 2015, when things suddenly changed.

In 2015, the NHTSA claimed there was a spike in traffic accidents and the only way to stop it, was to give police departments millions of dollars. (NHTSA grants also fund DUI checkpoints and traffic programs.)

Coincidentally, in 2015 the mass media began publishing stories of towns losing money because motorists were afraid to speed because the fines and penalties are too high.

In Nevada, the state court system’s budget relies on millions of dollars in funding from such citations.

It is the same story in Michigan, where less tickets means the state lost more than $3 million.

Police Chief Michael Reaves of Utica, Michigan, says the role of law enforcement has changed over the years. “When I first started in this job 30 years ago, police work was never about revenue enhancement, but if you’re a chief now, you have to look at whether your department produces revenues,” he says. “That’s just the reality nowadays.”

But some cities, like New York City make billions ticketing and fining people!

Unfortunately, not every city can fine and ticket their residents $1.9 billion a year, so what will they do to increase revenue?

The state of California has invented a new way to get money from motorists, they want to fine people according to a person’s income. Which has judge’s and DA’s crying foul and worrying about lost revenue.

“The Judicial Council of California says under this proposal, the state will lose out on billions of dollars from the traffic tickets, which pay for government programs.”

And finally police in New Mexico, use their rearview mirrors to ticket motorists, even though the courts have ruled that practice to be illegal.

“Prosecutor James Tierney argued that the deputy would continue pulling over cars for the same “violation,” even if the evidence were suppressed in this case.”

Is it a coincidence, that the NHTSA claims there’s been a spike in traffic accidents during the same time, cities and towns have been losing money?

The odds of being ticketed by police are increasing at an alarming rate, as politicians and law enforcement invent new ways to take money from the public.

DHS claims their grants are meant to save budgets lives

Department of Safety and Homeland Security Commissioner David Purkey challenged law enforcement to “take these grants and use them to save lives.’

Let’s be real, if the government really wanted to ‘save lives’ they wouldn’t give police millions to ticket more people.

There as so many government agencies working to ticket and arrest motorists, it shouldn’t surprise anyone when the number of stopped and ticketed motorists continues to rise. 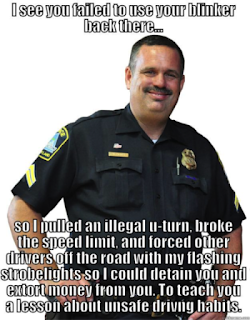